On 31 December 2022, New Year’s Eve, we will commemorate the fire that destroyed the Goetheanum a hundred years ago. The building erected after the laying of the foundation stone on 20 September 1913 first made Anthroposophy visible in artistic forms.
This, in addition to the social threefolding activities after World War I and the development of the spheres of actively applied Anthroposophy up until 1922, provoked growing criticism and opposition, culminating in the destruction of the First Goetheanum in the New Year’s night of 1922/1923 following an arson attack. At the 2022 Christmas Conference, which will be in three parts, we would like to look back to that momentous occurrence. From 27 to 30 December, we will focus on the immortal creative impulse that gave rise to the artistic forms of the First Goetheanum. The afternoon and evening of 30 December will be devoted to a commemorative event with representatives of the local public and political life. The fire itself with its historical and spiritual dimensions will be our central theme on 31 December. On New Year’s Day 2023, we shall look ahead to future impulses arising from the work of the Sections of the School of Spiritual Science. We would like to spend the New Year’s Night with you, with artistic and contemplative activities, commemorating and looking forward to the future. We look forward to welcoming you at the Goetheanum and to commemorating this momentous event together.

Link to the Conference flyer 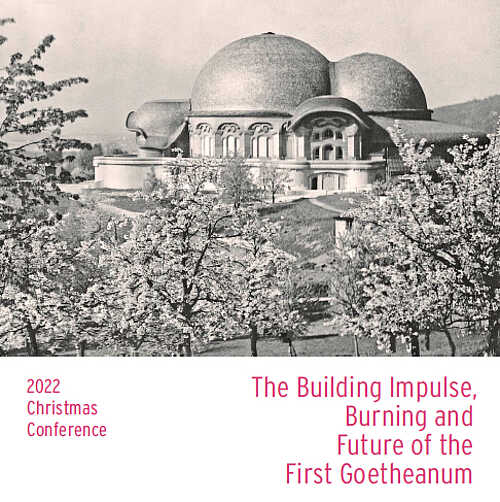